To know more, please read the article below.

Our bodies are formed from an innumerable number of cells and molecules. Both DNA and RNA play a role in determining cells’ function and purpose. At a conference of the National Congress of the Spanish Diabetes Society, researchers revealed new studies regarding the potential role of long non-coding RNAs (lncRNAs) in the development of type 1 diabetes, as well as the risk of cardiovascular problems in individuals with the disease.

A recent study found that lncRNA, which are use in transcriptional and post-transcriptional regulation of cells and are not translated into proteins, may be involved in the destruction of insulin-producing beta cells. There may be some forms of lncRNAs that affect inflammation and cell death, which are factors in the development of type 1 diabetes.

Dr. Izortze Santín Gómez, a professor at the University of the Basque Country and a researcher at the Biocruces Bizkaia Research Institute is studying the fundamental characteristics of the lncRNAs and how they may affect pancreatic beta cells on a genetic-molecular level. Once this is better understood, researchers could begin modifying the lncRNAs to create a targeted therapy that increases survival rate and viability of the pancreatic beta cells.

Another study that was presented at the conference involved cardiovascular risk for individuals with type 1 diabetes. Joseph Ribalta, a professor at the Rovira i Vigili University of Reus, found that “more than 30% of heart attacks occur in people with apparently normal LDL cholesterol.” High cholesterol is a key risk factor for heart attacks. His findings have revealed that individuals with T1D may be at greater risk because “LDL particles are more numerous and smaller, that their HDLs work less effectively and/or that there are some lipoproteins (remnants) that the body has trouble eliminating.”

Identifying these potential risk factors and knowing how to test for or treat them could help reduce hidden cardiovascular risk in individuals with T1D. For instance, focusing on triglycerides rather than cholesterol may be beneficial for patients who meet certain criteria.

There is a lot of interesting work coming out of laboratories and universities around the world regarding type 1 diabetes. Researchers are constantly improving and refining their understanding of the disease and possible ways to prevent, treat, or cure it. Diabetes Research Connection (DRC) is committed to contributing to this wealth of knowledge by providing critical funding to early-career scientists pursuing novel research studies focused on type 1 diabetes. To know more, please read the article below.

Keeping HbA1c levels within a healthy range can be challenging for those living with type 1 diabetes. It requires constant vigilance when it comes to monitoring blood sugar levels and administering the appropriate amount of insulin. Even with careful management, there can be complications.

A recent study found that a once-daily pill used in conjunction with insulin may help reduce HbA1c levels by as much as 0.32% after 12 weeks.  The pill, known as TTP399, activates glucokinase in the liver.  This, in turn, stimulates the body to improve glucose utilization which can lead to lower blood glucose levels. Overall, this could help improve HbA1c levels as well as time spent within a healthy glucose range.

A randomized, double-blind, adaptive study compared participants taking the TTP399 pill versus those on a placebo.  Those who received the pill showed improved glucose response and fewer symptomatic hypoglycemic episodes.  The average improvement in HbA1c was 0.21%, and there was also an average of an 11% reduction in the dosage amount of total daily mealtime bolus insulin needed.

On the other hand, the placebo group showed a 0.11% increase in HbA1c after the 12-week trial period.  Neither group reported any incidences of diabetic ketoacidosis, and there was only one incident of severe hypoglycemia, which occurred in the placebo group.

This phase 2 study involved 85 participants. They were all currently either administering daily injections or using an insulin pump.  If they were using a continuous glucose monitor (CGM), they had to be on it for at least three months prior to the start of the study to be included.

According to Steve Holcomb, president and CEO of vTv Therapeutics, “Consistent with FDA guidance, a 0.3% improvement in HbA1c is considered clinically meaningful and coupled with the well-controlled population of patients and favorable safety data from our clinical trials to date, this provides a strong basis for moving this potential first-in-class program forward.”

The pill could be used in conjunction with insulin therapy as a way of further managing and reducing HbA1c levels. This an exciting step forward in terms of type 1 diabetes management and supporting individuals in staying within healthy ranges for HbA1c and daily blood sugar levels.

Diabetes Research Connection (DRC), though not involved with this study, is interested to see how it evolves moving forward, and what it could mean for the future of oral treatment involving noninsulin products.

Research for type 1 diabetes continues to improve and advance every single day, and DRC helps makes this possible by providing critical funding to early-career scientists pursuing novel research studies on type 1 diabetes.  Through generous donations from individuals, corporations, and foundations, they are able to provide researchers with up to $50K in funding to support studies aimed at improving prevention measures, enhancing quality of life, reducing complications, and finding a cure.

COULD INSULIN-PRODUCING BETA CELLS PLAY A ROLE IN TRIGGERING ONSET OF TYPE 1 DIABETES? 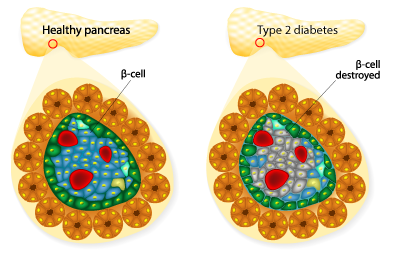 Swiss researchers have demonstrated a way to cure type I diabetes without cell transplantation. In model mice the reprogrammed non-islet cells from human pancreas.

Typically, only pancreatic beta, which lack in people with type I diabetes, cells can produce insulin. Pedro Herrera and colleagues investigated whether human pancreatic alpha and gamma cells from diabetic and non-diabetic donors could be reprogrammed to produce insulin in response to glucose. The authors report that increased expression of two key transcription factors (Pdx1 and MafA) enabled cells to produce insulin — the first direct evidence of plasticity of mature human non-beta pancreatic cells.

Herrera’s team then tested whether these insulin-producing human alpha cells could relieve the clinical signs of type 1 diabetes in mice that lack insulin-secreting beta cells. When insulin-producing alpha cells from multiple donors were transplanted, glucose tolerance, secretion, and blood levels normalised in the mice. The cells continued to secrete insulin for up to six months after transplantation.

These findings provide conceptual evidence for plasticity of human pancreatic cells. Fostering this plasticity to replace missing cell populations could represent a potential treatment for diabetes and other degenerative diseases.